Have you ever played paintball before? If so, you’ll know exactly how enjoyable the extreme sport is. Paintball is a relatively quite recent addition in terms of outdoor activities. It’s fun, exciting, and competitive. Perfect for a range of ages and occasions. Birthday celebrations, Hen & Stag parties, corporate team-building, or just something to do with your friends and family on a Saturday afternoon. But just who’s idea was it?

When you think about it, the notion of shooting your friends, colleagues, or nearest and dearest with a ball of paint (which incidentally can be rather sore depending on the calibre of gun you’re using), has to be the result of a spark of inspiration somewhere along the line. So, let’s take a look at how events unfolded, and the people who made it all possible.

First things first. Have you ever heard paintball instructors referring to guns as “markers?” That’s because back in the 1960s, a man called Charles Nelson designed a paintball gun as a tool for marking things and more particularly, trees from a distance. The gun was to enable foresters to mark trees which are deep in woodland or across rivers. Nelson’s paintball marker also proved popular with ranchers for marking cattle.

Unfortunately for Nelson, his original Crosman 707 paint marker became a commercial failure in 1972. Undeterred, he took his idea to one of America’s largest BB gun manufacturers, who agreed to make the now iconic Nel Spot 007 paintball marker. It was at this time, as the new marker entered circulation, we begin to see unconfirmed reports of foresters, ranchers and farmhands beginning to play paintball games.

The first recorded paintball game took place in 1981 and was played by 12 competitors. Bob Gurnsey is the man who wrote the rules, while participant Bob Jones covered the game for Sports Illustrated. The winner of the first ever paintball game was Ritchie White, (now there’s some real trivia for all you paintball aficionados out there).

The world’s first commercial paintball field opened in 1982. It was the brainchild of Bob Gurnsey, who marketed paintball as the National Survival Game, or NSG for short. The first NSG National Championship was won by Canadian team the Unknown Rebels. The event was even covered by People Magazine!

The International Paintball Players Association was founded in 1988 to oversee the growth and safety of the sport. The not for profit organisation implemented the 300 feet per second speed limit on paintball markers – a standard still widely followed to this day and used mainly semi-automatic weapons. It was a game at the World Cup soon after!

As early as 1994 the sport went cyber, with Steve Mitchel creating the first paintball website, Warpig. The following year Paintball made its TV debut when the 1995 World Championship Games were televised from Florida.

The sport was now in a position to go global, and BOY did it!? Paintball is HUGE and constantly evolving thanks to instructors and paintball centres adding their own twist to tried and tested games. Kilkenny Activity Centre is proud to be home to Kilkenny’s ONLY paintball arena. We cater for all age groups, from 8 yrs upwards, so if you haven’t tried it yet – you’ll find us just outside Ireland’s Medieval City. 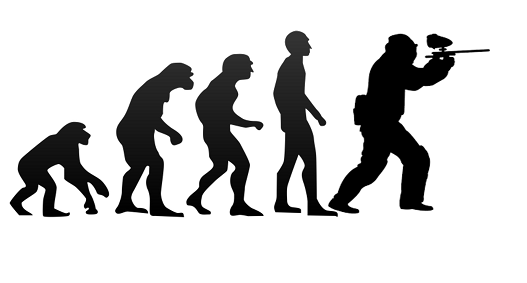