If you’re into hurling, you might hear people calling out ‘Come on the Cats’. Traditionally, Kilkenny people are known as The Cats. There are a couple of different versions to back this statement up. Keep on reading if you want to find out why.

Over centuries soldiers around the time of 1802 were stationed in Kilkenny. As they got bored in the barracks, to entertain themselves they would tie two cats’ tails together, hang them over a washing machine and let them fight one another. Back then, there were no such things as tv’s, laptops, or phones…. you just had to create your own entertainment. One day, an officer heard the dreadful sound as the lookout man failed to give warning on time. In a tizzy, one soldier cut off the tails of both cats to try to let them go. Unfortunately, he was not able to hide the evidence of the two cats’ tails that were left behind. The soldiers told the officer that the cats were fighting so aggressively it was impossible to separate them and they in fact had eaten each other up except for their tails. The meaning of this story is that Kilkenny people will fight until the end. This statement is very true and evident when it comes to GAA and hurling.

The second version of the story took place years ago when there was a battle against thousands of cats from Kilkenny and thousands of cats that came across Ireland. The battle took place outside of Kilkenny. The cats all fought so viciously, there were thousands of bodies left. The fight was based on disagreements in the area between the people in the Kilkenny area and other parts of Ireland.

The term ‘The Cats’ has become a symbol for fighting. Two people fighting is described as fighting like ‘the Cats’. It has become the mark of honour of the people of Kilkenny. Who would of known?! 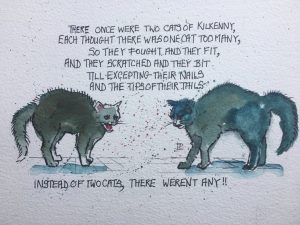